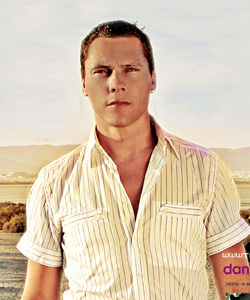 Tijs Verwest, Tiësto, such as real name, became interested in already eight years old for the work of DJs. In his youth, he laid then on as a resident DJ of the small clubs Spock in Breda. There he was discovered by trend scouts from Rotterdam.

From the mid-1990s he published himself produced tracks under several artist names and with various labels. In 1997 he founded with his friend and production partner Arny Bink in the scene the now legendary label Black Hole Recordings.

The big break came for Tiësto in 2001 with the remix of Deleriums Silence (featuring the voice of Sarah McLachlan), the number three on the Billboard Charts. After a few mix CDs, In 2001, his debut album „In My Memory“ on the market. The album was a huge success, even in the United States.

He was first elected by the readers of the British magazine DJ Mag for best DJ in the world in 2002. 2003 and 2004, he defended his first place. In 2003, he was with „Tiësto In Concert“ is the first DJ, who alone in a stadium (Gelredome in Arnhem, The Netherlands) in front of 25,000 spectators spinning records.

On 13 August 2004 he accompanied at the Summer Olympic Games in Athens, the entry of athletes into the stadium. This is with millions of viewers around the world to date, probably the biggest gig of a DJ. In the same year her albums „Just Be“ and „Parade Of The Athletes“ came out. He also hosted „Tiësto In Concert 2“, where he handed in a massive show in front of 70,000 fans.

In 2005 he had a solo appearance at Disneyland Paris and four concerts in the U.S. (Los Angeles, Washington (DC), Miami and New Orleans) in the context of „Tiësto In Concert“ U.S. tour. In the same year that followed „Tiësto CEE Tour 2005“ while he visited cities such as Prague, Bratislava, Zagreb, Belgrade and Budapest. 2006 Tiësto was at the Love Parade reprint it.

Since April 6, 2007 Tiësto has a weekly radio show at the Dutch radio station Radio 538 In „Tiësto’s Club Life“, he presents the latest electronic dance music and are in the „15 Minutes of Fame“ young DJs a platform to present themselves to a broad audience . Originally, the program „Club Nouveau“ meant, but was renamed due to name disputes after five shows. An international version in English is also available as a podcast.

In summer 2008, Tiësto came to Ibiza back there to celebrate every Monday at Privilege (the largest nightclub in the world) his „In Search of Sunrise“ party series with fellow guest DJs very successful. The CD series „In Search Of Sunrise“ is one of the most successful compilations worldwide in the electronic field.

For release of the globally successful video games „Alone In The Dark“ is an exclusive remix of the title theme „Edward Carnby“ grammynominierten from Tiësto, who is of course also be found on the „Dream Dance 50“!